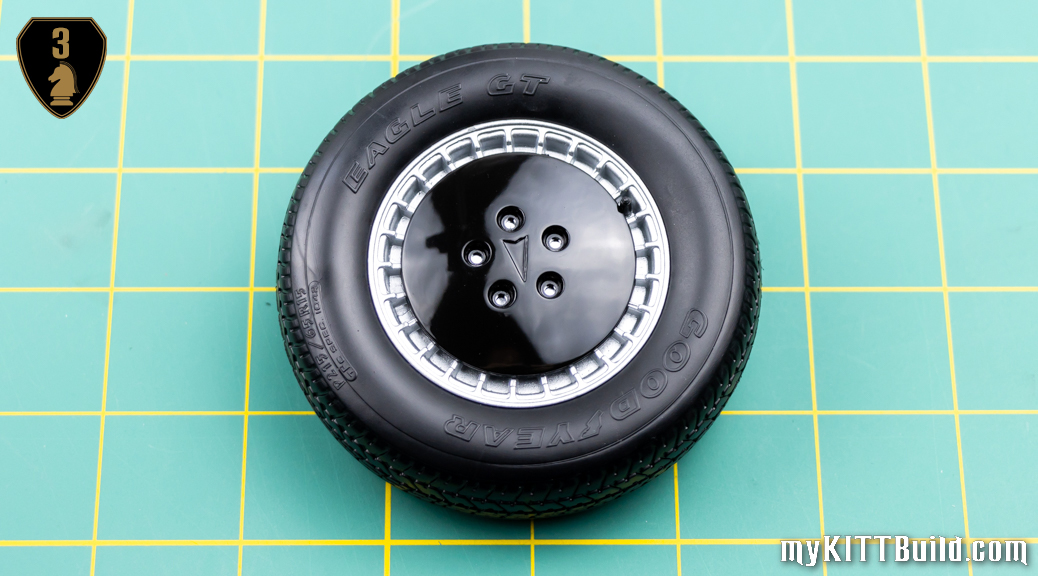 Return to the BUILD

“In this issue, you will join the rim, tire, brake parts, and knuckle to form the first wheel on your model.“ 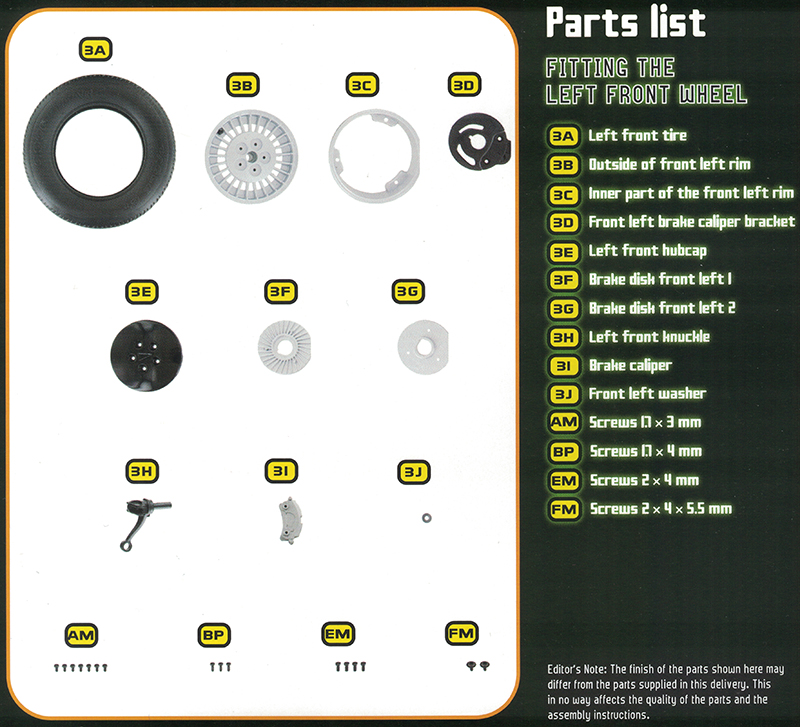 Materials: The two Front Left Rim parts and the Knuckle are metal, the Tire is hard rubber, and the other parts in this issue are plastic. 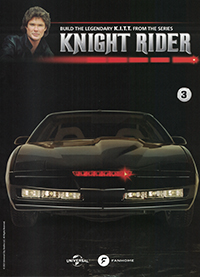 Fit the Outside of Front Left Rim into the center of the Left Front Tire, as shown.

While handling this Outside of Front Left Rim, be careful not to damage the delicate pre-installed valve stem (arrow below). Also, the Tire is the same on both sides, so it shouldn’t matter which side you start with. Knowing this, I checked both sides of my Tire and noticed a small molding mark on one side. Therefore, I placed this Outside Rim on the ‘good’ side so the mark would not be visible on the finished model.

TIP: If you soak the rubber Tire in warm/hot water for about 30 seconds first, it will be much easier to assemble this wheel: 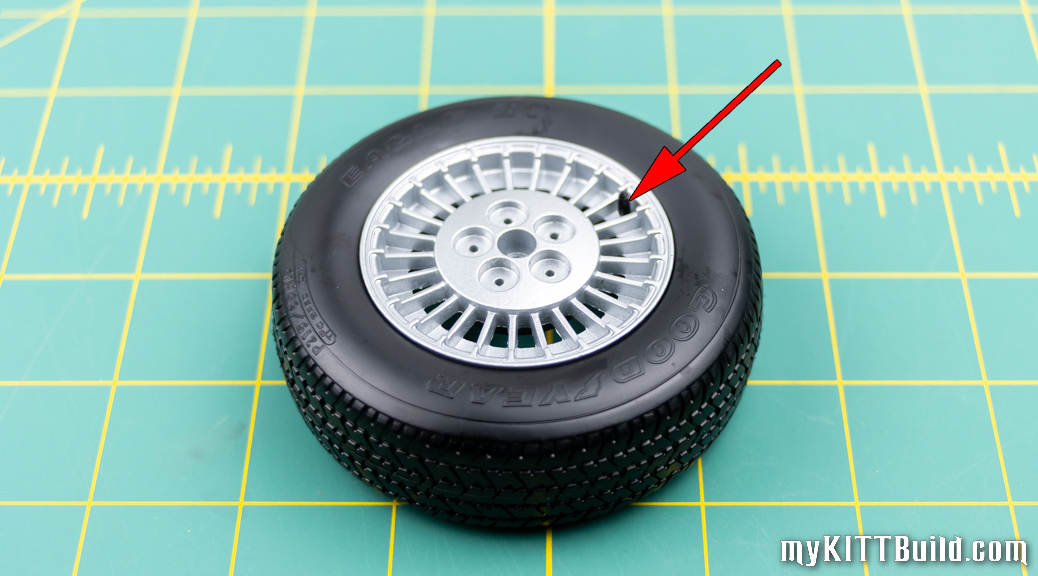 From the other side, insert the Inner Part of the Front Left Rim into the Tire and align the three screw holes in both Rim parts: 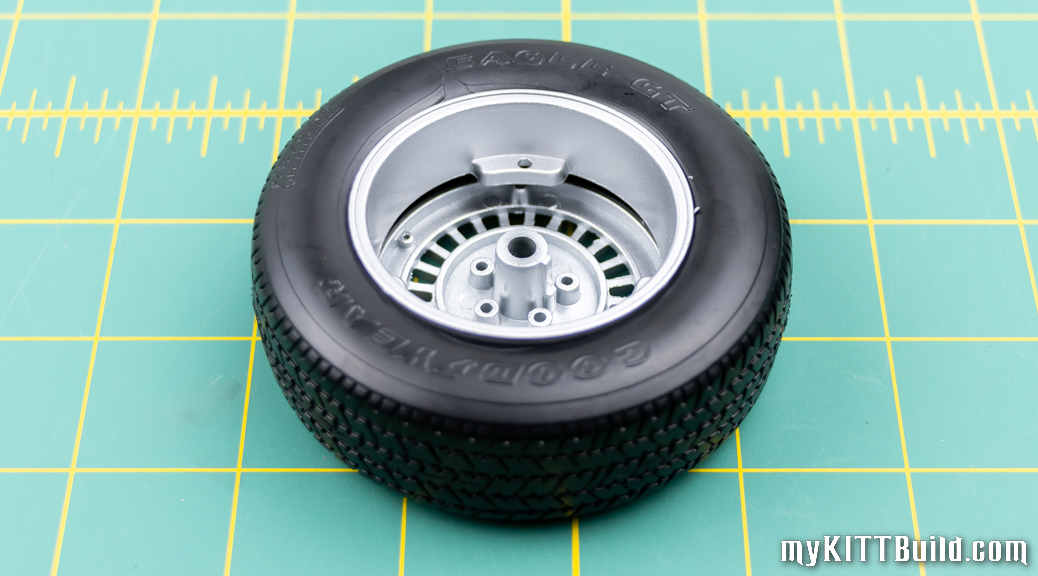 Secure the two Rim parts together, capturing the Tire in between, with three (3) EM screws.

This is your friendly reminder to try using 3-in-One Oil on all screws going into metal: 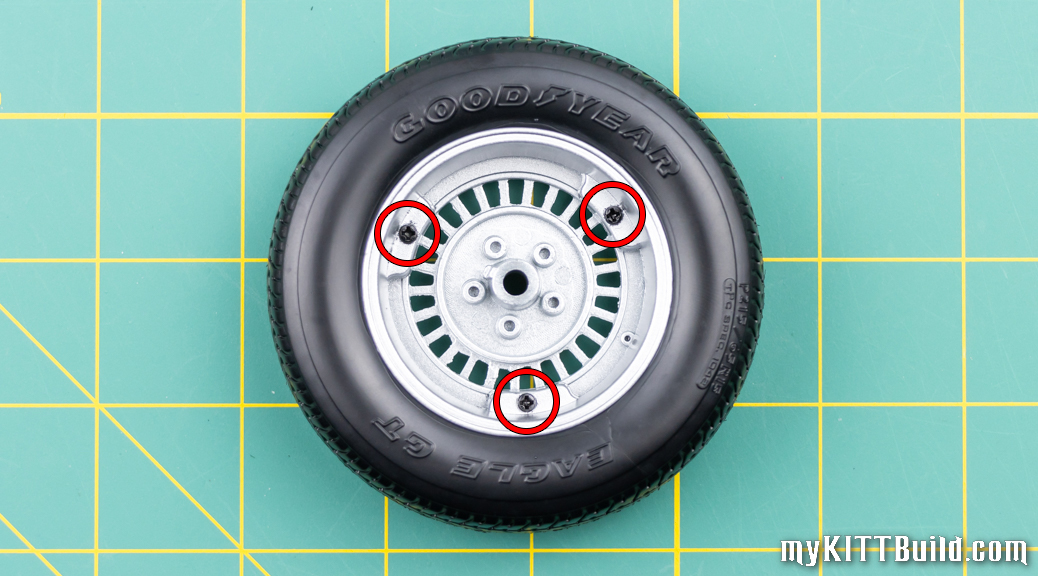 Fit the two posts of the Brake Caliper into the matching holes of the Caliper Bracket, as shown: 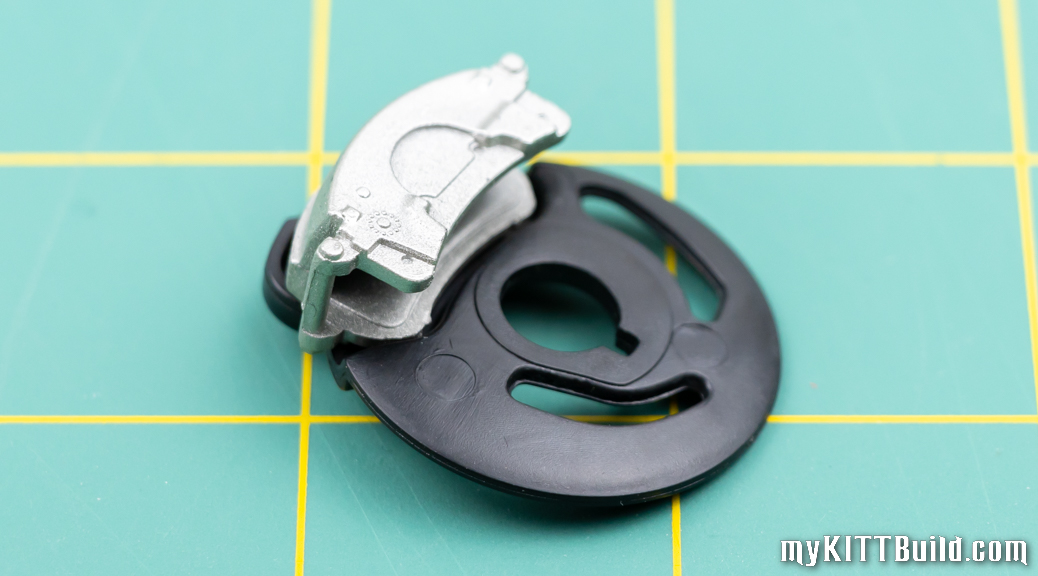 Secure these parts together from the other side with two (2) BP screws: 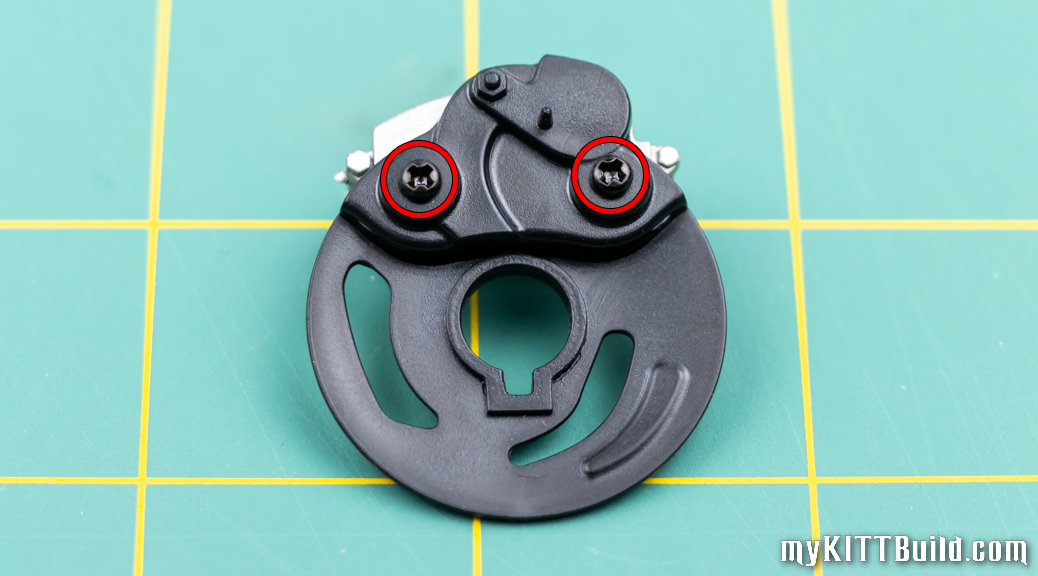 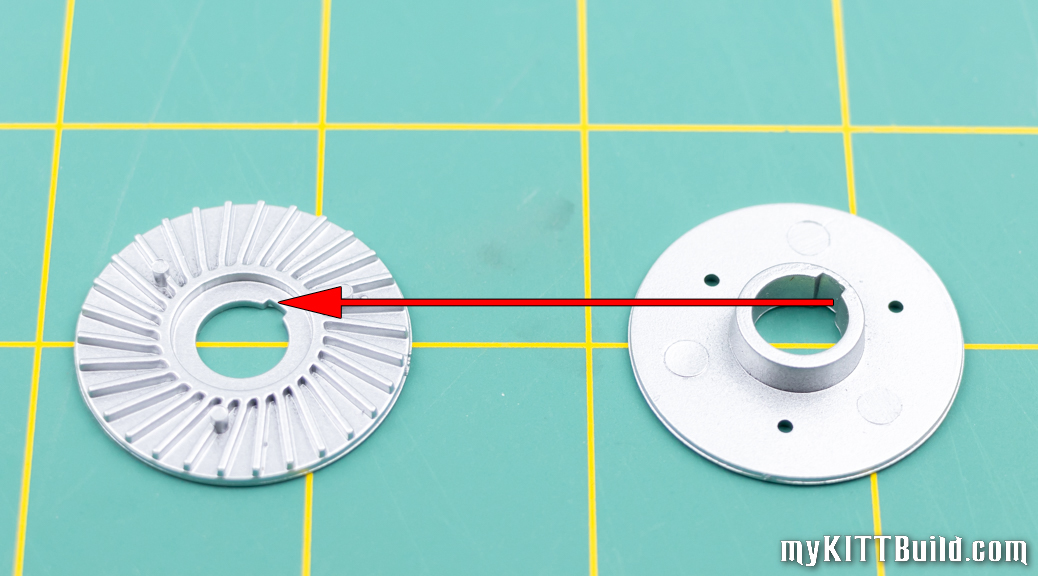 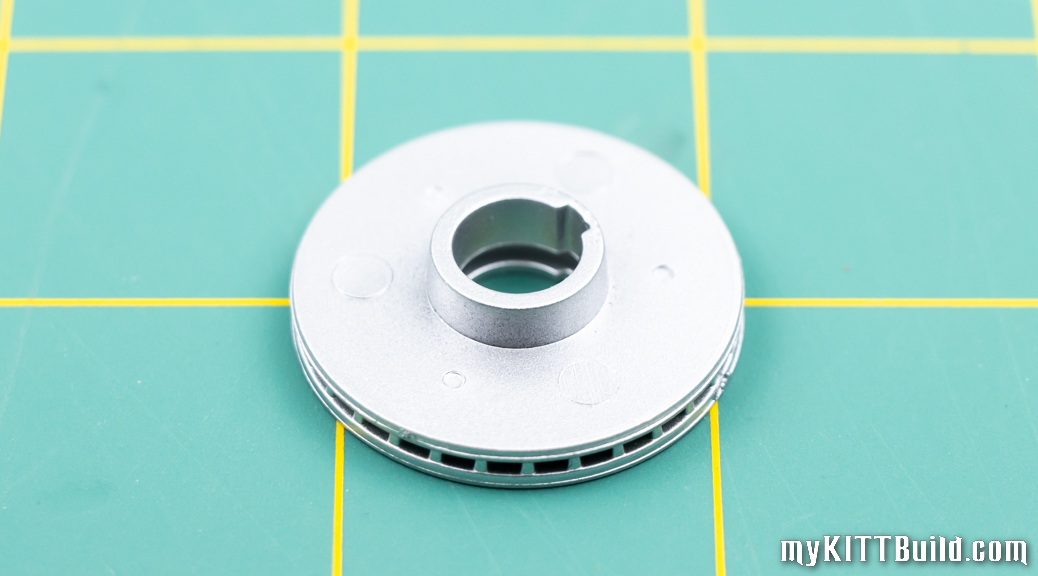 Slide this Brake Disc assembly into the Brake Caliper.

Mike Lane Mods produces a set of Metal Drilled Brake Discs for the front wheels of our K.I.T.T. partwork build. Even though you will barely be able to see the brake discs once the hubcaps are installed, this is one of those mods where we know it’s in there even if you can’t see it. Kind of like all the work I did on the BTTF DeLorean engine only to have it buried inside the model. NOTE: The TV show cars did not have drilled brake discs, so if you are going for pure accuracy, this mod is not necessary. 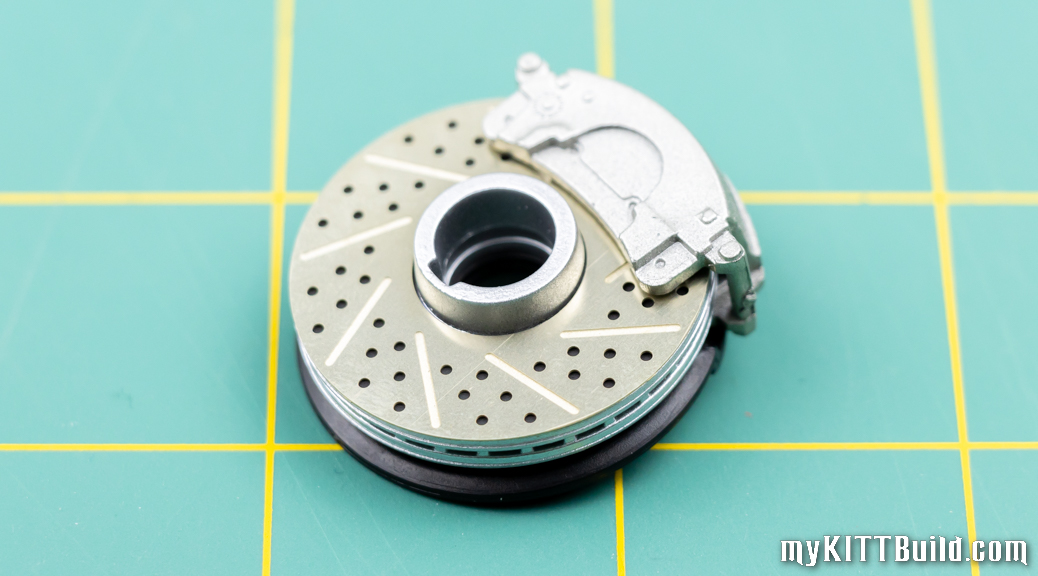 Slide this Brake Disc assembly over the long post of the Left Front Knuckle, aligning the tab of the Knuckle into the matching notch in the Caliper Bracket as shown: 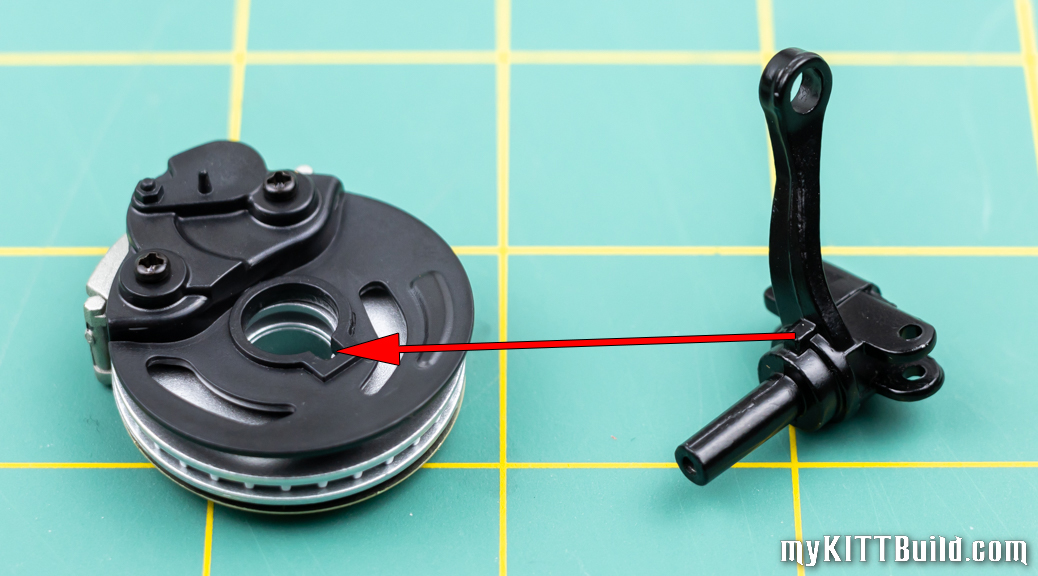 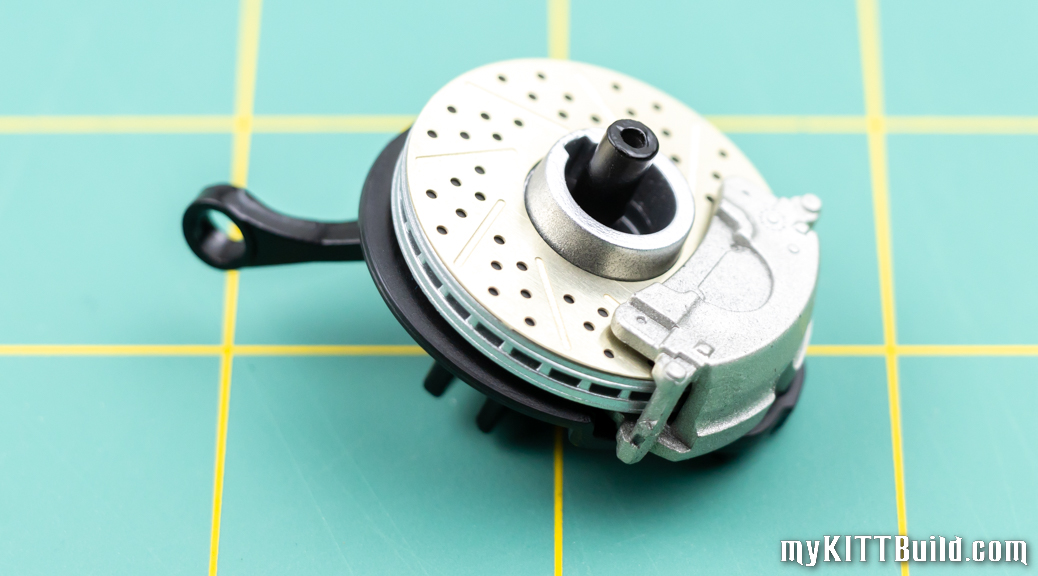 This is the tab on the post of the Wheel assembly. This tab is what needs to be aligned to the slot in the Brake Disc: 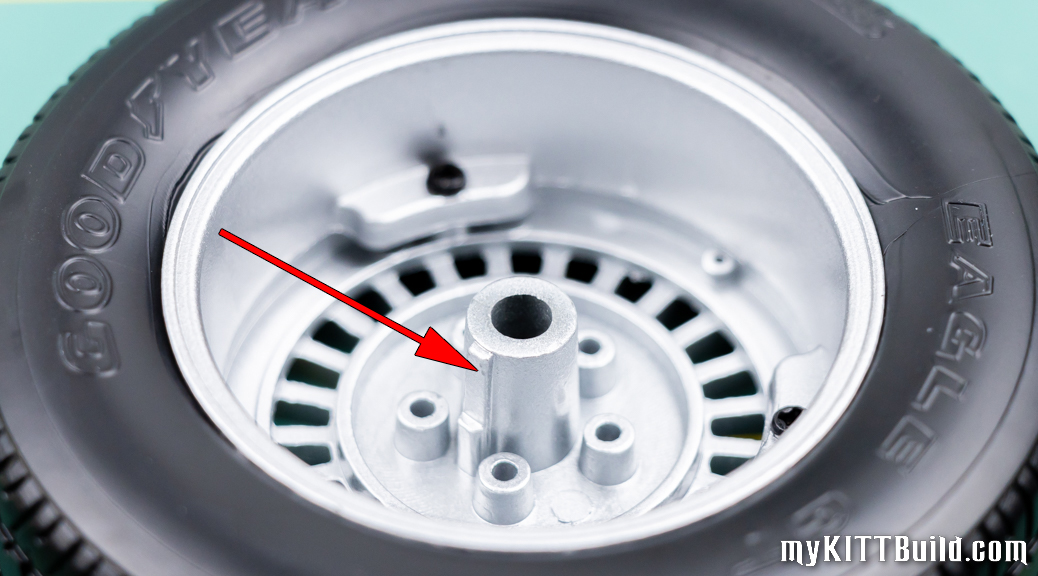 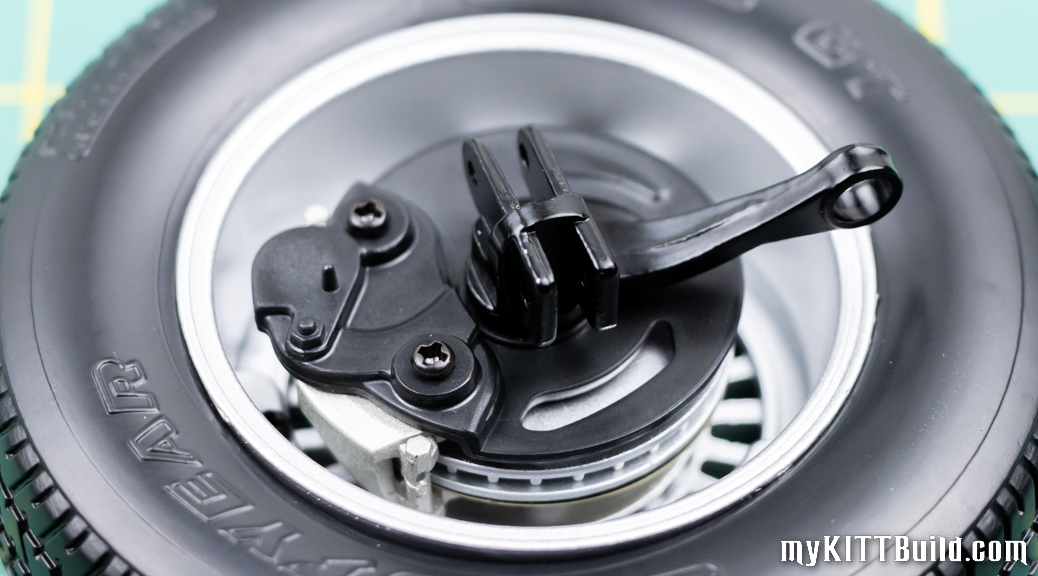 While holding this Wheel/Brake assembly together, drop the Washer into the center hole of the outer Rim: 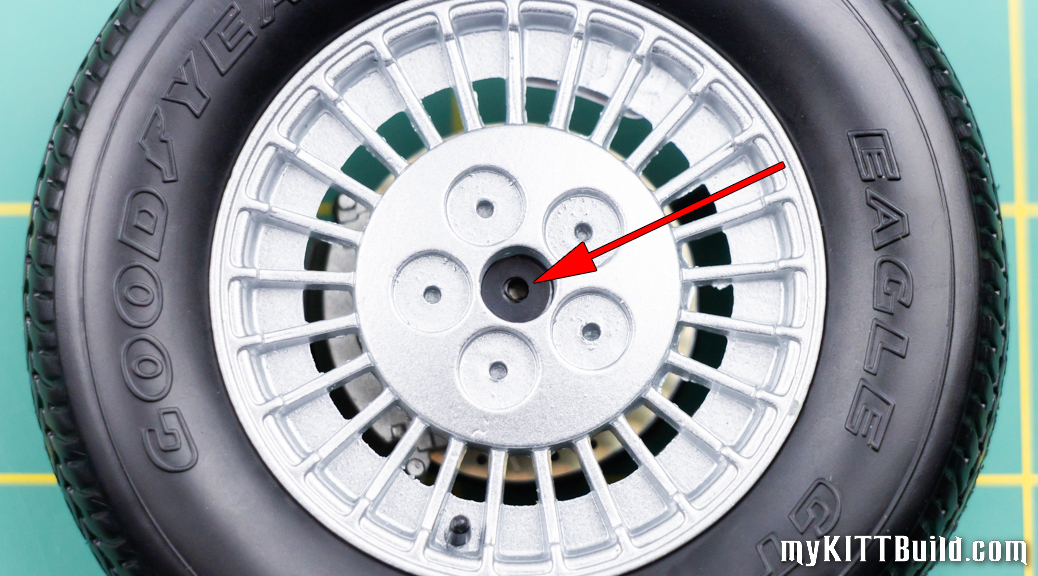 Then, secure the Wheel assembly to the Knuckle with one (1) FM screw.

The tighter this screw is, the harder it will be to turn the wheel: 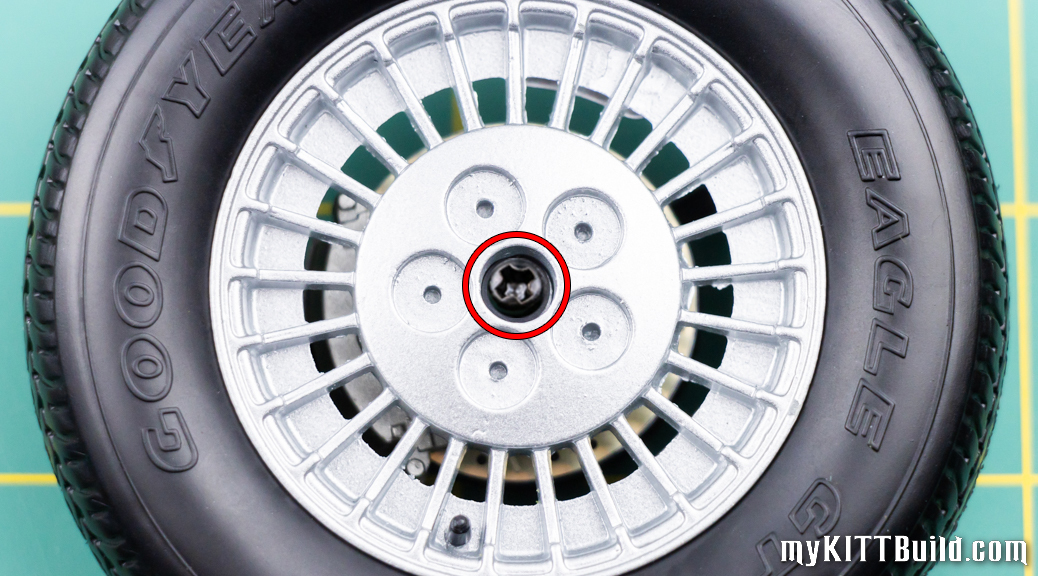 Fit the Hubcap to the outside of the Rim, aligning it to the five ‘lug nut’ holes: 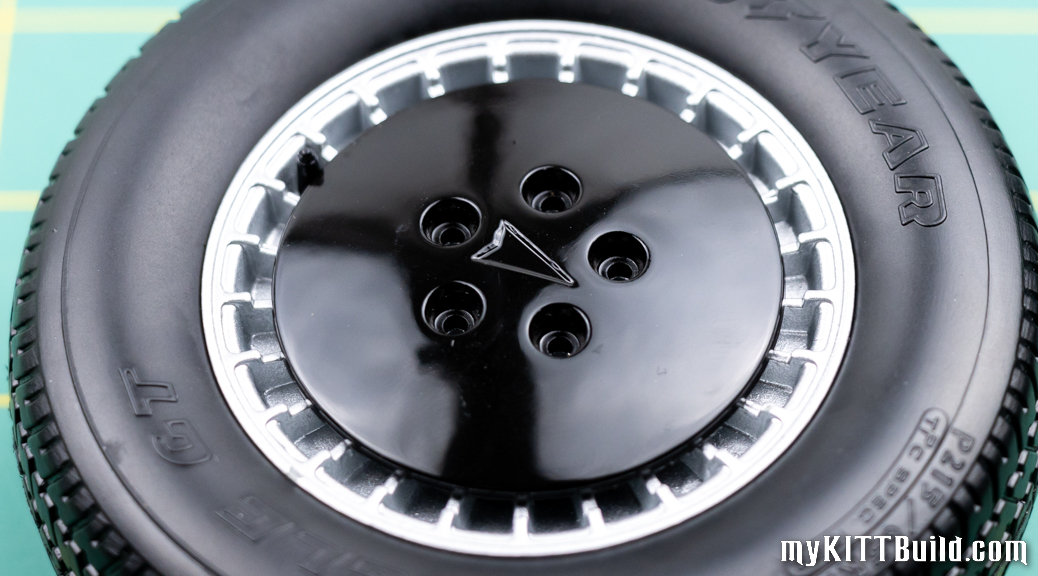 Secure the Hubcap into place with five (5) AM screws: 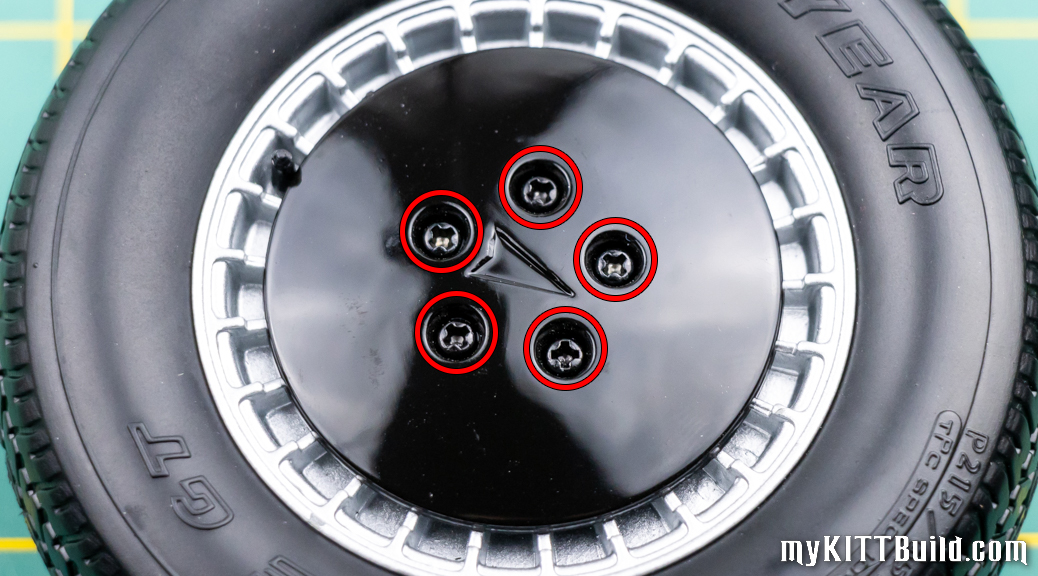 If you are interested in eliminating the screws from your Hubcaps, I recommend trying the Magnetic Hub Caps mod from Mike Lane Mods. It only took a few minutes to add this modification to my wheel and I think it makes my Hubcap look much more realistic: 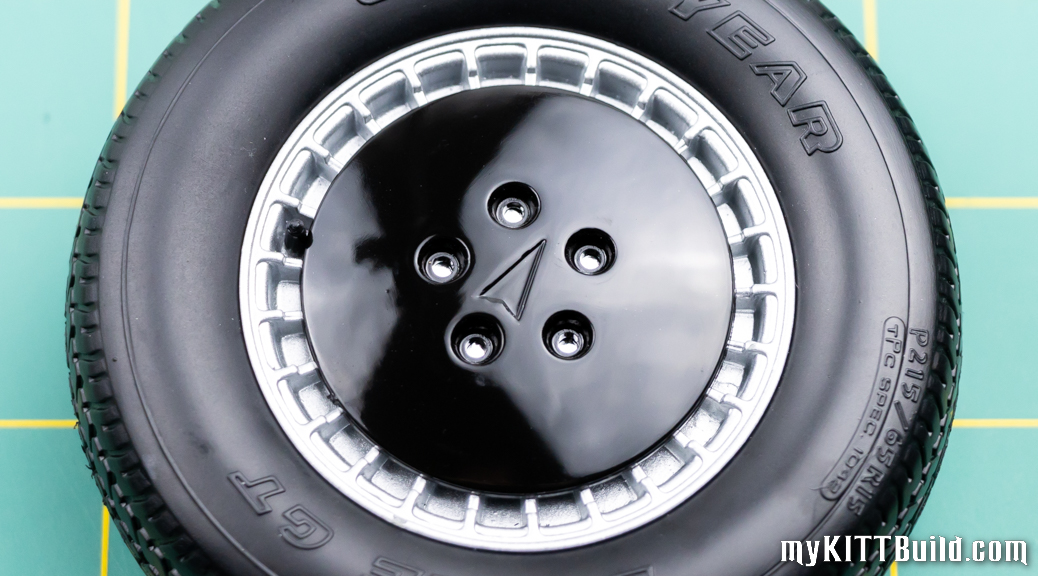 While a wheel is not especially exciting to build (and we have to do it three more times), it is nice to see the classic ‘bowling ball’ hubcaps that gave K.I.T.T. a sleek futuristic look. Die hard fans of the TV show know that if you watch closely, you can even see K.I.T.T. losing a hubcap here and there during hard driving! Keep this Wheel assembly stored safely for now – we won’t attach it to the car until Stage 8.

This site uses Akismet to reduce spam. Learn how your comment data is processed.